In the Ozarks, there is plenty of water. Springs are especially !Magical! places full of wondrous entities invisible to the eye. And the water is delicious.

There are a plethora of old buildings ready to come down with readily usable materials. Here is an old barn that Ini is salvaging from. It’s quite possible most of the tin roof for our tiny strawbale home will come from this effort. 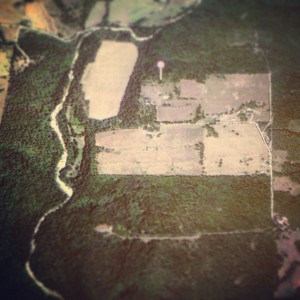 Aerial view of the property we’re most likely going to make a bid on this week. It’s mostly surrounded by forest (which we love), 100s of acres of which are inhabited by an ancient (70s) lesbian commune called DragonWagon. That’s Beaver Creek winding to the West. We have met the neighbors and while they are a slightly different brand of Crazy than we are (let me tell you my salvation story!), they seem to be generous, kind, and down-to-earth people (like most of the Missourians we’ve met!). 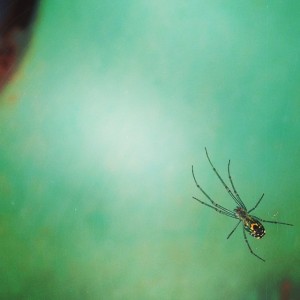 And of course, la araña… weaving her web

everything vibrates out from the center
sacred language prevails

in the midst of our violent economies, going back to the earth, where we take care of ourselves as if we are the earth *which we are

I believe this is the only way.

In the grander scheme of things, I’m in the midst of my Saturn Return which means I am transitioning into another level of “being me”, “taking responsibility”, “manifesting my purpose while here on earth.” Certainly it feels that way… Like the changes that are taking place have been a long time in the making. Like ‘baby-making’… It has been a gestation period of gathering skills, ideas, inner fortitude, connections, visions… until that alchemical combo is ready to Birth itself.

Now is the Perfect time. So… we’re moving! From Taos, NM where we’ve been homing since November, 2014 to the Ava, MO area — to look for land to buy in order to birth this incredibly creative, land-based, universally inspired Green Baby of the Goddess.

How many homesteads, ecovillages, farms, gardens, radical human habitations have I visited while gestating this baby within. (sigh) Oh So Many 🙂 And Ini, too. In terms of universal pairing, I think the Goddess Herself has done well attracting us two together… A true Match Made in Earth… And grateful for it.

Today is in fact our 2 year anniversary from when we decided to join forces in Creating What We Want to See in the World. Oh so much gratitude. Earth Match Resonance. And lately I’ve been learning from my mentor April about astrology, so going through my chart on another level and then seeing it next to Ini’s Chart. What, were we planned to be together? Haha; it is very Complementary. We are in opposition, after all, he having many signs in Pisces and planets in the 7-12th houses, and I being Virgo with 1-7 houses, mainly. It’s very interesting to look at our charts and go Oooooo that makes so much more sense!

So there is a lot to be grateful for as we transition forward. Of course I’m also scared- this is my edge after all. I am inviting Grace in as We step into the Unknown.

But what else can I  expect in our Saturn Return Transitions 🙂 It’s all good.

poesy, prose, photography from wren haffner
Follow falling leaves as they come on WordPress.com
allow your soul to become a channel for grace